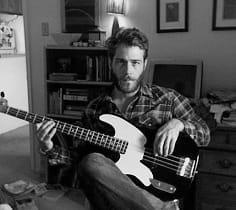 Special Guest: Corby Schaub
ABOUT HALE:
As a songwriter, musician and bandleader, Hale has been working out of Austin professionally for over a decade. In addition to his time behind the mic, he’s put in time as a sideman, playing bass for Texas and national acts like Gary P. Nunn, Chris Wall, Chapparal, Danni Leigh, Mike Graham, Shawn Pittman and many more. Now on the Shiftone Records roster with an arsenal of original songs and all star band behind him, Bracken Hale is quickly earning respect as a powerful new wave of alt country.
Inspired as a child by the albums of Waylon Jennings, the hymns of the church and by his mother’s piano and folk-style guitar, Bracken Hale began at an early age playing, writing and developing the style and a sound that he now calls his own. Based out of Austin since 1997, Bracken has covered a whole lot of highway and probably played every dancehall and honky-tonk in the State. Contributions as a songwriter have produced a number of cuts by independent artists, spanning across the country, rock, blues genres.
Born in Oklahoma, the son of a Texas and Native American historian, Hale grew breathing in the folklore of the plains and drawing inspiration from the landscape and the people who belong to it. His earliest memories are of the Navajo reservation in Tsaile, Arizona where his father took his first collegiate teaching job. “We lived in a brick house, but for religious reasons it was eight-sided like the Navajo hogans, with a living room in the middle and pie-shaped bedrooms. The whole neighborhood was like that.” The Hales moved from Arizona to Minnesota, before settling in Norman, Oklahoma, where Bracken spent the majority of his childhood. He credits author J. Frank Dobie as an early motivator: “Coronado’s Children had a big impact on me as a kid. There are some universal truths about human nature that those stories seem to tap into. That little adventurous what if causes you to wonder what part is truth and what part is tale. Then there’s the classic situation: I had it once and lost it. That’s the part that really makes the story. There’s a formula to it and it works every time.”
***On Monday Nights, we proudly present our Singer Songwriter Listening Room. This is the night our artists get to tell their stories and how their songs were written. As a courtesy to them and our patrons here to see them, it’s the one night we ask for no talking during the show.
We know this is a social place, so if you want to have a conversation please do so outside on our sunset patio. Thank you for understanding and enjoy the show!***