One Nation Under a Groove feat. George Clinton & Parliament Funkadelic at Haute Spot 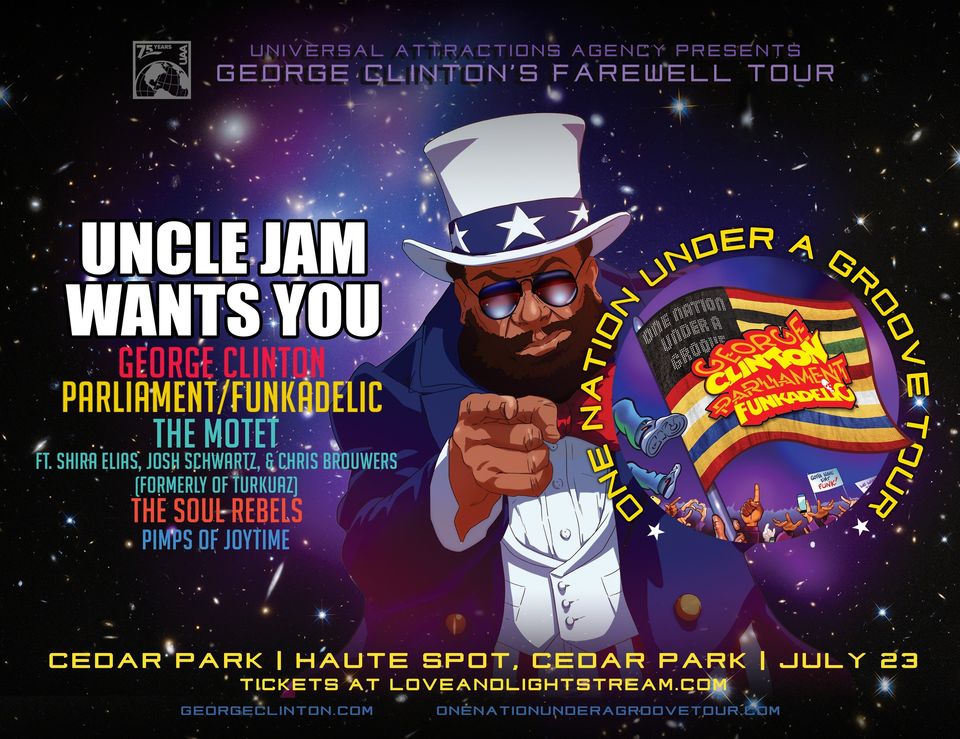 Are y’all ready to get funky w/ George Clinton and Parliament Funkadelic on Saturday, July 23 at Haute Spot in Cedar Park, TX?! The stacked One Nation Under a Groove tour also features:
– The Motet Ft. Shira Ellis, Josh Schwartz, Chris Brouwers (formerly of Turkuaz)
– The Soul Rebels
– Pimps of Joytime
– Blue Extinction
Tickets go on sale Friday, March 25 at 12 p.m. CT: www.etix.com/…/one-nation-under-a-groove-cedar…
With a career spanning 50 years of pioneering music, breaking down cultural barriers, and blurring the lines between genres to the delight of his ever-growing fanbase, George Clinton continues his unstoppable march forward into the future of music. As so many generations of fans have come to realize, the Godfather of Funk is so much more than the artist who ‘blew the roof off the sucka’ with his blockbuster “Mothership tour” in the 1970’s – an event that still looms large in the minds of fans from that era. He is so much more than the man who discovered Bootsy Collins, produced a young bunch of dudes called The Red Hot Chilli Peppers before they were a thing, even more than just the man who’s music gave birth to so much of hip hop culture by way of his influence on Ice Cube, Snoop, Dr. Dre, and countless others who sampled his music over the years. Taken alone, any one of these would be a monumental accomplishment for most artists. But George was never satisfied with what happened yesterday, and 2015 saw George Clinton win a Grammy (finally) with Kendrick Lamar for the album “To Pimp a Butterfly.
Weather:
All shows are rain or shine, but if there is significant thunder, lightning strikes or flooding before the show, we will inform ticket holders 1 hour before that we are watching the weather closely, and potentially delay doors in 30 minute increments until official show start time.
Age Restrictions: 18+
For full show policies please visit loveandlightstream.com/general-info