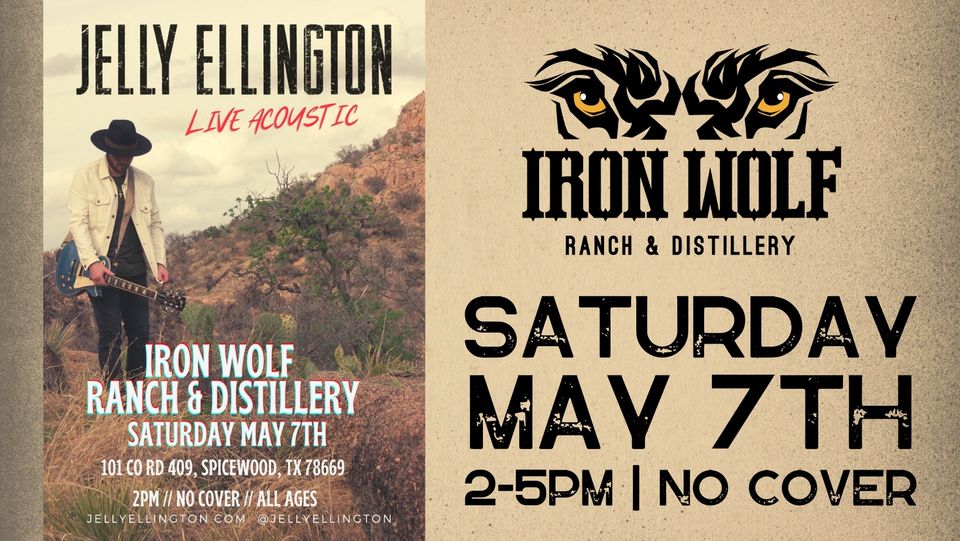 Don’t miss Jelly Ellington LIVE at Iron Wolf Ranch & Distillery on Saturday, May 7th from 2-5pm! NO COVER//ALL AGES!
Claiming Texas home for the last nine years and originally from Asheville, North Carolina, Jonathan “Jelly” Ellington, has been courageously crafting his unique sound as an American guitarist, singer, and songwriter since first picking up the guitar at age seven. An electrifying fusion of impassioned vocals and vivacious guitar playing, Jelly delivers his Blues-centric Rock and Roll by way of his dynamic stage presence and evident classical training.
Making the move to the Lone Star State in 2011 with a Rock band call Treetop Sailors, Jelly authentically incorporated himself into the Austin music scene with local groups such as Candi & The Muthaload, The Warplanes, MC Overlord, and even touring with a few Country acts out of both Austin and Nashville. Since 2016, Jelly decided to fully hone into creating a name for his own sound, dedicating his time and energy to his solo pursuits. Having shared the stage with Grammy Award-winning artists and Texan icons alike, there is no wonder he was voted in the Top 10 “Best Guitarists” in the Austin Chronicle’s Austin Music Awards in both 2018 and 2019.
Join us at Iron Wolf Ranch & Distillery for LIVE music, fun, food, craft spirits, games & more. FREE ENTRY, all ages and on-leash pets welcome. We even have a playground for kiddos… There’s something for everyone! Open Friday 4-8pm, Saturday 12-8pm and closed Sundays.