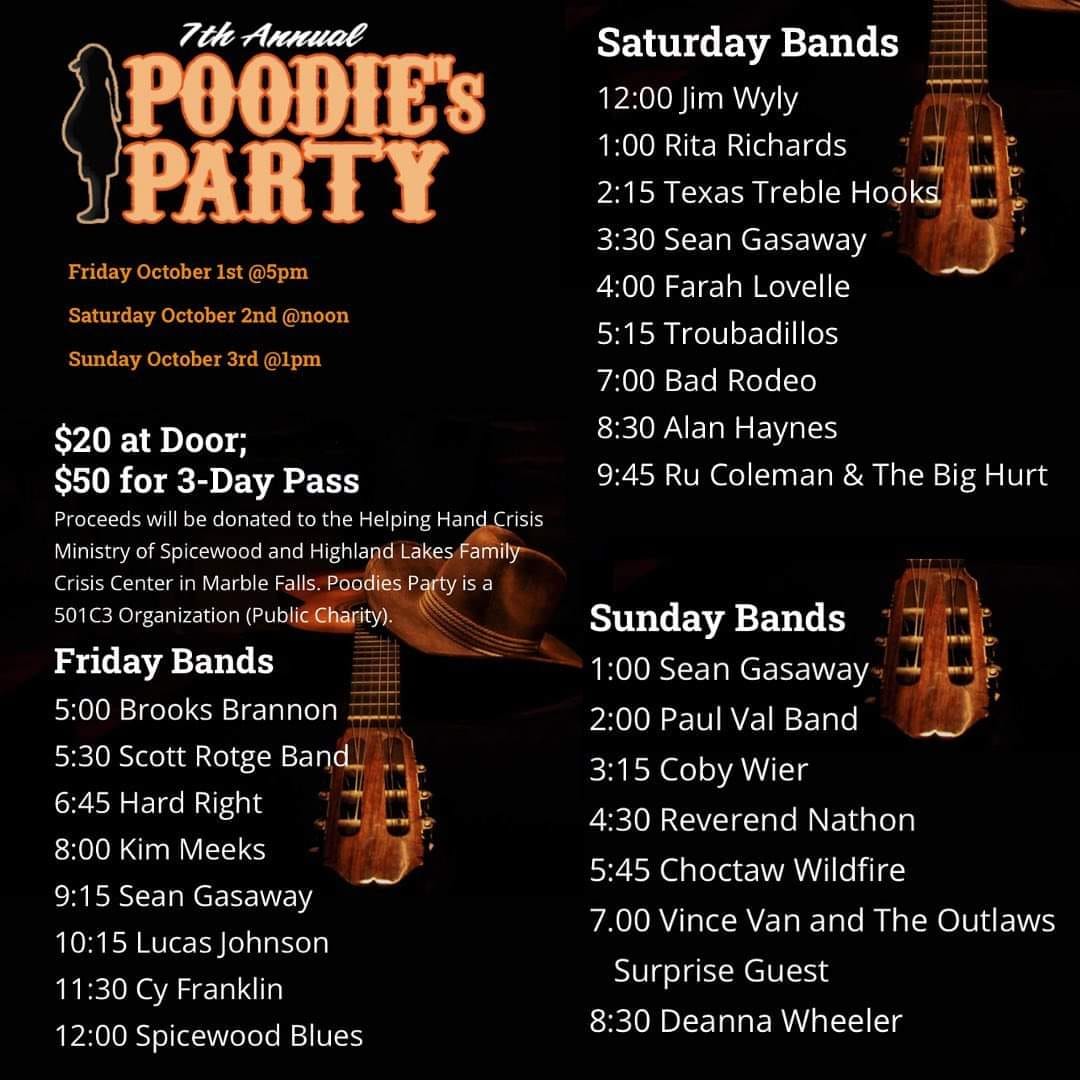 Three Days of Great Live Music to honor Poodie’s 73rd Birthday (posthumously). Over 20 bands in 3 days hosted by the Troubadillos & Bad Rodeo. For a complete list of Musicians and Sponsors, please visit
www.poodiesparty.com
$20 Donation per Day
$50 Donation for 3 Day Pass
Door Prizes, Vendors, Food, Raffles, & Auction Items.
This year’s proceeds to benefit:
HELPING HANDS CRISIS MINISTRY OF SPICEWOOD
www.helpinghandspicewood.org
HIGHLAND LAKES FAMILY CRISIS CENTER of MARBLE FALLS
www.highlandlakescrisisnetwork.com
Poodies Party is a 501C3 organization.
About Poodie Locke
James Randall (Poodie) Locke was born on Oct. 3, 1948 in Waco, Texas. As a baby, Poodie was once voted the “Prettiest Baby in Waco.” After finishing high school in Waco, Poodie attended North Texas State University in Denton and worked at the Marriott in Dallas. During this time he also served in the U.S. Army’s 101st Airborne Division. He started in the music business in 1973 working for B. W. Stevenson.
In November 1975, Willie Nelson hired Poodie as an equipment set-up and load-out man. After several years as a roadie, he worked his way up to stage manager. He traveled the world with Willie for 34 years making many lifelong friends along the way. Poodie was the “King of the Roadies.” He was known in almost every major town in the country and as far away as Japan and the entire European continent.
Poodie coined unique phrases, such as “No Bad Days,” “Baby Boy” and many more. He gave everyone their own special nickname. He loved playing golf at Willie Nelson’s Cut-N-Putt, where a foursome might have as many as 10 or 12 players on a single hole. Through Poodie’s Hilltop Roadhouse, he helped many musicians get their start, and many went on to become successful recording artists. He showcased some of the finest musicians not only from Texas but from all over the country.
Poodies Hilltop continues to be a famous music venue that is an important part of the Austin Music Scene. Poodie passed away suddenly on May 6, 2009. His funeral was S.R.O. (standing room only), even though his services were held at one of the biggest auditoriums in Waco. His friends came from all over the world to bid him farewell. He will always be remembered and greatly missed by all who knew and loved him. GOD BLESS POODIE LOCKE!